It’s easy to think that the world of geospatial is just maps and data, but the truth is that it goes much deeper than that. Before your organization undertakes a GIS project, it’s important to sharpen your understanding of what it entails. While the list isn’t comprehensive, it’s a good beginning on the fundamentals.

American Standard Code for Information Interchange (ASCII): This file format uses a set of numbers between 0 and 255 for information storage and processing.

Aspect: Aspect is the slope direction on a terrain surface measured clockwise starting north as 0° to 360° north again with flat areas given a value of -1 or 0 degrees.

Basemap: This is a background, non-editable, georeferenced image that gives a point of reference on a map, providing an aesthetic appeal.

Buffer: The buffer tool is a proximity function that creates a polygon at a set distance surrounding a selected feature or features.

Cartography: The study, aesthetics, and science of representing real-world entities on maps by communicating spatial information.

Coordinates: Coordinates are pairs (X, Y) or triplets (X, Y, Z) of values that are used to represent points and features on a two and three-dimensional space.

Database Management System (DBMS):  A collection of tools that allows the entry, storage, input, output, and organization of data, serving as an interface between users and databases. 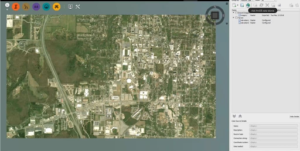 Feature: A cartographic point, line, or polygon object with a spatial location in the real-world landscape that can be used in a GIS for storage, visualization, and analysis.

Field (Attribute Table): Characteristics used to describe each feature in a geographic data set usually viewed as columns in a table.

Geocoding: Geocoding is the process of assigning geographic coordinates to places based on street address, town/city, province/state, and country.

Hydrography: A term describing the geographic representation of water features such as streams, rivers, and lakes.

Latitude: Coordinates of Earth locations that vary in north-south directions ranging from 0° at the Equator to 90° (North or South) at the poles.

Map Legend: A visual graphic of the symbology used in a map that tells the map reader what polygons, lines, points, or grid cells represent.

Nominal Scale: Type of measurement that indicates the difference between classes or categories of data.

Parallax: Measures the apparent shift in relative positions of Earth features when it is viewed in different locations.

Polygon: A closed, connected set of lines that defines a geographic boundary with an area and perimeter such as lakes, forests, and country boundaries.

Query: A request or search of spatial or tabular data based on user-defined criteria, resulting in a subset of selected records.

Raster Data: A data model used in GIS which is usually regularly-size rectangular or square-shaped grid cells arranged in rows in columns.

Remote Sensing: The science of obtaining information about the Earth without physically being there, such as by satellite, unmanned aerial vehicle, and aircraft.

Slope: The change in elevation or steepness with respect to change in location measured in degrees or percent slope.

Spherical Coordinates: A system based on a sphere defined by two angles of rotation in orthogonal planes such as latitudes and longitudes in a geographic coordinate system.

Thematic Layer: A distinct spatial entity in a data layer that is usually delineated as points, lines, and polygons.

Topography: The study and mapping of Earth’s features including land surfaces, relief, natural, and constructed features.